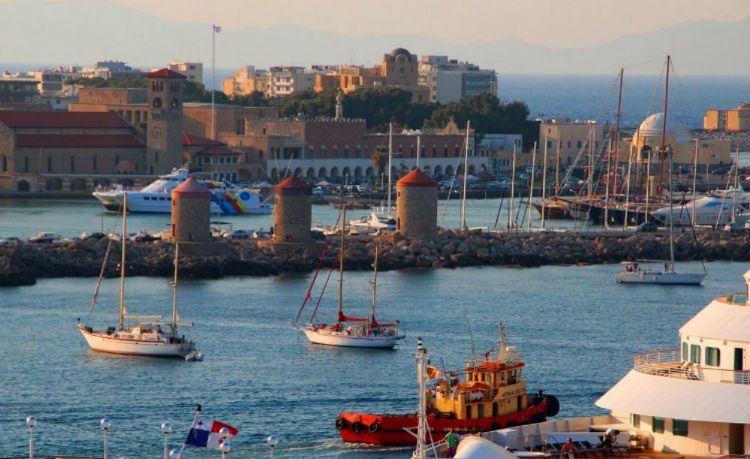 The island was firstly inhabited during the prehistoric ages. During the 5th and 4th centuries BC there was great development and it was then that the Colossus was erected. The island was invaded and colonized by many foreign powers. One can see the ancient city-fort of Lindos dating back before the 7th century BC, the mosque of Suleyman, the Castle of the Knights of St. John, the colonial architecture of the Italian occupation which ended in 1948 and much more.
“Rodos” as it is called, is a green island with endless beaches of sand or small pebbles, with waterfalls and valleys full of butterflies. Quaint villages dot the country side some hidden in gorges so that the Saracen pirates could not see them from the sea. The island possesses a very well maintained road network with clear markings both in Greek and English.
The temperature is mild throughout the year reaching quite high during the summer.
The City of Rhodes:
The city that gave its name to the seventh wonder of the world and which has been in the front line of events for thousands of years is today still luring people from all over the world. The city which has been part of the glorious civilization of Ancient Greece, played a role during the Byzantine era, was home to the Knights Hospitaller (later known as the Knights of Malta), was also part of the Italian occupation. All these periods of its history can be clearly seen in this city. Despite its history, dating from the Bronze Age, the city itself was built in 408 BC by the Athenian architect and first city planner Hippodamos, as a capital for the united city states of the island.
The Old Town of Rhodes dating back to the medieval times has been declared a “World Heritage Site” Today the city of Rhodes is a bustling port with cruise ship visits throughout the year and a base for trips to the neighbouring islands. An attraction in itself, it comprises of the new and old city, the large marina with magnificent boats, the modern casino and a sandy beach within walking distance from the city centre.