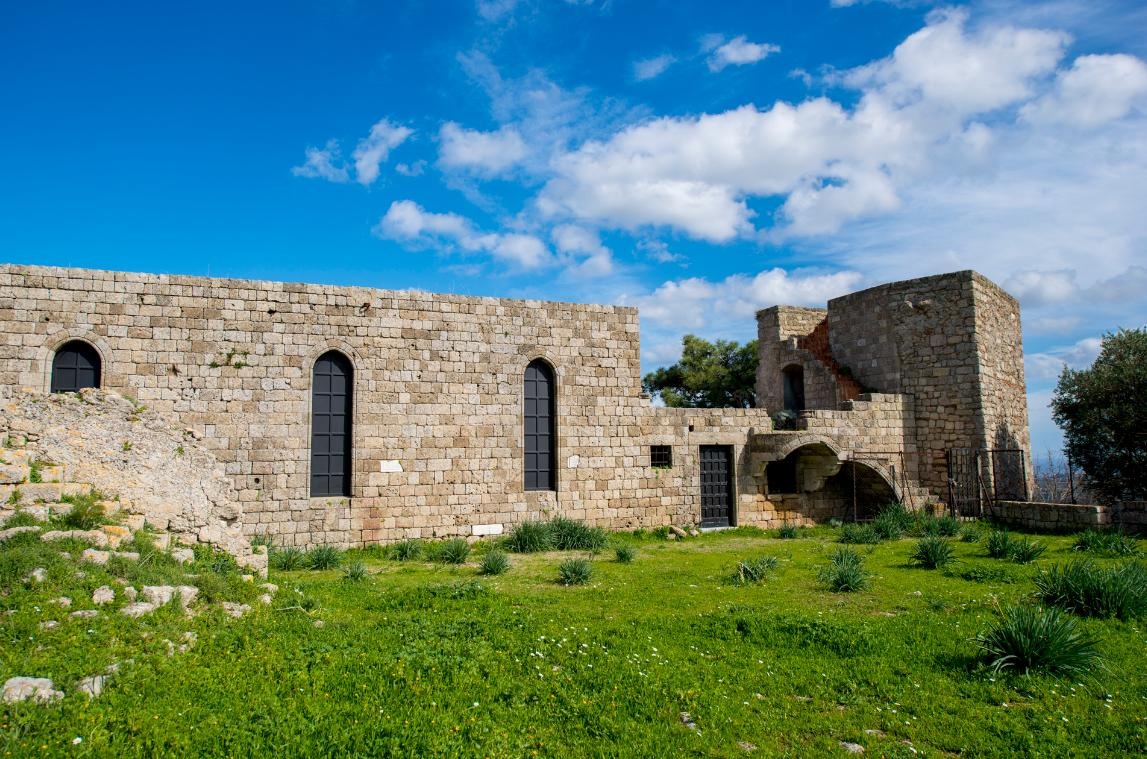 The Gothic church of Panagia is on the hill of Filerimos, at an altitude of 247 meters, on the position formerly occupied by the acropolis of Ialysos and the ancient temple of Athena Polias, which was converted into a three-aisled Early Christian basilica on the 5th century AD, from which today only the cruciform baptistery is preserved. The Temple, dedicated to Zoodochos Pigi (Life-giving Spring), was built by the Knights on the position of an older Byzantine church. At a lower level from the monastery there is the underground single-space Byzantine church of Saint George of Chostos, with 14th-15th century frescoes depicting knights.
The site was restored during the Italian occupation. The so-called Golgothas, a stone-paved corridor with twelve copperplates on pedestals, representing the Passion of the Christ, starts right across the entrance. The route ends at a 17.80-meter high cross, with an internal staircase, which gives access to the horizontal soffit with a panoramic view.
The icon of Panagia of Filerimos was the most sacred artifact of the Knights’ Order. It was called “Panagia Kecharitomeni”. It is said that it was created by Saint Lucas the Evangelist. The face of Panagia is painted on a canvas which was applied on the wooden surface. Some historians believe that members of the Order brought it to Rhodes from Jerusalem. Others say that the Order already found it on the island after it was conquered in 1310.
From 1200 to 1480 AD the icon was placed on the hill of Filerimos, after which it was named. In 1480 on the first Ottoman siege, the icon was transferred to the city of Rhodes and to the battlements, in order to boost the morale of the army. In 1522, during the second Ottoman siege, it was transferred again in Rhodes and it was kept in the temples of Saint Catherine and Saint Mark inside the Medieval City.
In 1523, the Knights transferred with them the icon of Panagia of Filerimos in Malta, where it stayed until 1798, protecting the island in the Ottoman siege of 1565. When Napoleon the Great took over Malta in 1798, the icon travelled to Russia, together with two other knight artifacts: the hand of Saint John Prodromus and a piece of the Holy Wood. In the October revolution of 1917, the three artifacts were moved to Copenhagen, Berlin and Belgrade until the bombardment of the city in 1941, when they were transferred to the Monastery of Ostrog and remained there until 1952. The Government of Montenegro placed them in the National Treasury, and in 1978 it delivered them to the monastery and the museum of Cetinje.
The icon has been kept in the Blue Chapel of the National Museum of Montenegro since 2002. In the church of Panagia of Filerimos there is a copy of the icon, a gift from the Metropolis of Montenegro.