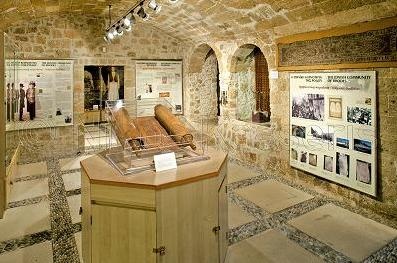 The Jewish Museum of Rhodes began in 1997, with an exhibition with photographic material at the site next to the Synagogue, where the gynaeceum used to be. The inspirer of the idea and founder is Aron Chason, lawyer from Los Angeles, and third generation Rhodian. He founded the foundation “Rhodes Historical Foundation”, a non-profit organization which has collected photographic, historical material, donations and items from Rhodes and throughout the world, and created a web-page for the information of the local community and the visitors of the island on the history of the Community and on the single remaining Synagogue “Kahal Shalom”.
With the activation and the financial contribution of the Community and individual donors, the Museum was expanded, it tripled its size, and it opened in 2006, presenting the history and the every-day life of the Jewish community of Rhodes, as well as a special space dedicated to the chronicle of their massive execution.